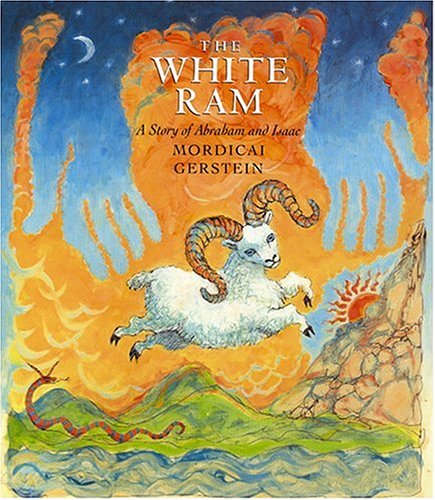 The White Ram: A Story of Abraham and Isaac

In this powerful and lyrical picture book inspired by Jewish legends called Midrashim, Gerstein ( ) imagines the viewpoint of the white ram that plays a key role in the Bible story of Abraham and Isaac. On the last day of creation, God places a white ram in the garden of Eden, telling it to wait until God calls him. Years pass until the summons finally comes, and the ram must fend off the tricks and temptations of "the evil one" exclaiming as he travels afar, "I must save the child!" The white ram reaches Abraham just in time, offering itself as sacrifice instead of the boy—a bargain God wholeheartedly accepts. The ram's selflessness doesn't stop there, however. Among other things, it offers its horns as the sacred shofar, whose sound reminds all people of God's love and his forgiveness of the sins of "Isaac and his children and his children's, children's children" at each Rosh Hashanah or New Year's Day. Gerstein achieves a striking, textured medium using a sunny palette and a blend of pen, ink, oils and colored pencil. His depiction of a craggy and truly sinister-looking evil one, and formations of clouds and sky that suggest the hands of God, will have young readers repeatedly poring over these pages. Ages 6-10.