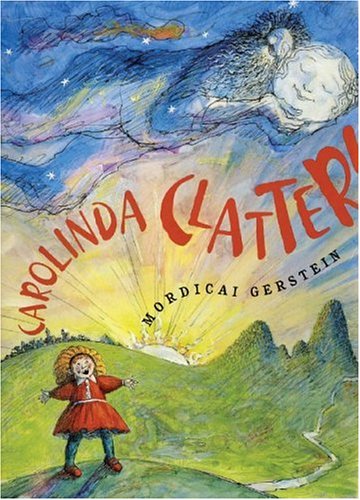 Caldecott Medalist Gerstein ( ) introduces Hugene, a bearded giant who falls in love with the moon. In a series of swirly, blue-hued illustrations, the smitten fellow dances and sings desperate "tra-las" in an attempt to woo the moon. Spurned, Hugene falls into a deep sleep: "His eyes became two ponds. His tears became two waterfalls. His beard and the hair on his head became forests." Over time, a group of people establish Pupicktown on his belly: "Babies didn't cry and children were afraid to scream and yell because everyone said, ' ' " Then, in a cacophonous spread, Carolinda Clatter is born. Gerstein marries riotous color, scrawled ink lines and a chorus of handwritten " "s to dramatize the change that comes over Pupicktown. Carolinda, an adventurous orange-haired heroine in the tradition of Pippi Longstocking, yells and laughs and "she sang all the time." Eventually, she does wake the giant, who thanks her for "the beautiful music." Carolinda, in turn, tells the giant how many people "need you and love you," before singing him happily back to sleep. With its echoes of Scandinavian folk legends, the story celebrates music, love and noise. But it's the joyous illustrations that make this book so deserving of a loud round of applause. Ages 5-8.