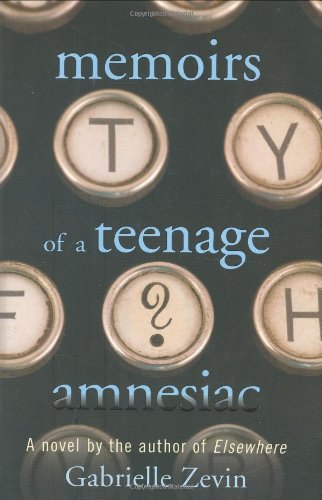 Memoirs of a Teenage Amnesiac

Departing from the science fiction premise of Zevin cooks up an entertaining love story out of what her narrator calls “chance, gravity and a dash of head trauma.” As the novel opens, 16-year-old Naomi has fallen down a flight of stairs and lost all memory of the past four years. She doesn't remember her parents' divorce (not to mention her mother's remarriage, her half-sister and her father's recent engagement to a tango dancer). Her best friend, Will, with whom she co-edits the school yearbook, and Ace, her tennis-player boyfriend, seem like strangers. What Naomi does remember is James, the first person she saw after her accident. The image of the boy—who helped her to the hospital and stayed to make sure she was all right—lingers as she tries to sort out her past and her feelings. Well-defined characters and convincing narration camouflage the Lifetime movie premise and the inevitability of every plot turn (no one will doubt which characters will become romantically involved and who will end up together). Naomi, adopted in infancy from a Russian orphanage, can summon up more than enough hidden emotional depths to counterweight the slicker aspects of the story; teens will identify with her vulnerability and her heightened feelings of alienation. And fans of psychological dramas won't want to put this book down. Ages 14-up.