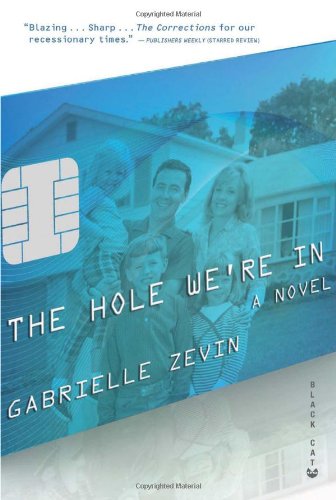 The Hole We’re In

Zevin (YA novel , etc.) delivers in her blazing second adult novel a for our recessionary times. While Roger Pomeroy spins his middle-aged wheels in graduate school, his wife, George, supports the family mainly via an ever larger number of credit cards opened in her recent college grad son Vinnie’s name. Meanwhile, daughter Helen insists on an expensive wedding, and youngest daughter Patsy gets pregnant and is transferred to a religious school out of state. Struggling to stay afloat, Roger and George deplete Patsy’s college fund, and Patsy in turn enlists in the army for the tuition benefits. She’s sent to Iraq and comes back injured and suffering from PTSD. Roger, in a not-quite-convincing turn, becomes an ultra-conservative Christian pastor, and long-suffering George goes off the deep end. Zevin mixes sharp humor with moments of grace as she gives readers terrific insights into the problems of adult children removing themselves from the influence of parents, and establishes herself as an astute chronicler of the way we spend now.