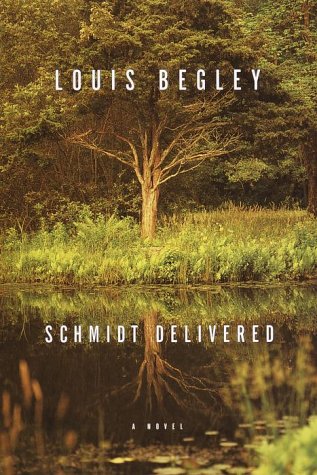 As the title indicates, the dire situation that Begley's protagonist, elderly, retired Wall Street lawyer Albert Schmidt, found himself in on the final page of About Schmidt resolved itself more happily than readers would have predicted. Now, a few months later, Schmidt is living in Bridgehampton, Long Island, with his beloved Carrie, a bodacious, promiscuous 24-year-old Puerto Rican ex-waitress. Surprisingly, she has refused Schmidt's proposal of marriage, and he is concerned about what the future will bring. So, apparently, are the only two friends he has maintained in the reclusive life he and Carrie maintain. His former Harvard roommate, filmmaker Gil Blackman, and his new, intrusive friend, billionaire Michael Mansour, an Egyptian-Jew, both give him advice on how to hold on to Carrie. (The monstrously egotistical Mansour, meanwhile, offers Carrie a million dollars to sleep with him.) Schmidt's life has other complications. His self-absorbed, truculent daughter, Charlotte, is in trouble and needs money. Charlotte's Jewish husband, Jon Riker, for whom Schmidt had finagled a partnership in his old white-shoe law firm, has been discovered passing secret documents to his lover, and has been fired. Then Carrie, as Schmidt feared, humiliates him with a new liaison. Worse trials are to come, with blows to Schmidt's emotions, pocketbook and self-esteem, and yet he achieves a bittersweet breakthrough of understanding and acceptance. Begley describes the ultra-rich, ultra-sybaritic Hamptons scene with dry relish. He proves adept at depicting sexual activities in Schmidt's bed, and he has a great ear for father-daughter bickering. Schmidt's unconscious anti-Semitism is even more ironic in this chapter of his life, and Begley plays that irony to the hilt. If he also loads the deck, making Mansour too smarmy, Charlotte too stubborn and obtuse, and Carrie unconvincingly angelic yet sluttish, his textured portrait of bewildered Schmidt is a triumph of empathy and compassion. (Oct.)
close
Details