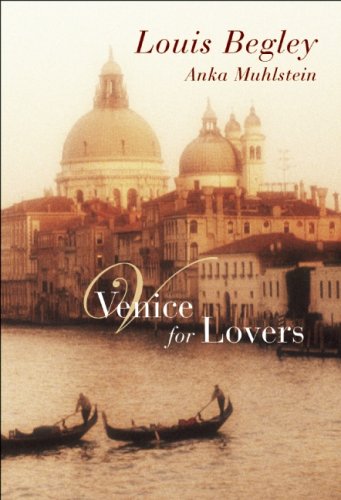 For decades, biographer Muhlstein ( ) and her husband, novelist Begley ( ), have traveled to Venice to spend their summers writing. This evocative collaboration—three short works, which together celebrate their beloved home away from home—translates the original, German edition released in 2004. In the first section, an essay, Muhlstein reflects on how they came to know the city through its people, in spite of the couple's strict, self-imposed rules against making friends during their sabbaticals. Their guides were the owners of the four charming restaurants that became their staples. Particularly memorable is Muhlstein's passage about Ernesto, who describes the devastating flood of November 1966. In the second section, a novella by Begley, the reader encounters Venice from the perspective of an American college student who travels there in pursuit of an older woman. She soon rejects him; however, in romance's stead, a deeper, more lasting affection for Venice and a friendship with a classmate develop. In the third section, Begley writes a treatise on Venice's role in the works of three authors he admires: Henry James, Marcel Proust and Thomas Mann. This triptych of works draws on the best of both worlds: the dazzled, fresh eyes of a pilgrim and the insight of a perennial resident. This book works less as a straightforward guide to piazzas and palazzos than as a stimulant to travels real and imaginary.