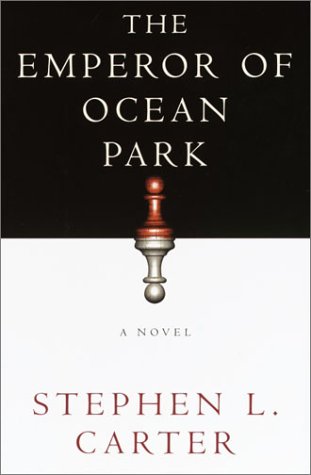 THE EMPEROR OF OCEAN PARK

Carter, a Yale law professor and distinguished conservative African-American intellectual known for his nonfiction (), has written a first-rate legal thriller guaranteed to broaden his audience. The narrator, Talcott Garland, is a law professor at Elm Harbor University whose occasional Carteresque editorializing about politics and justice are saved from didacticism by his abiding existential loneliness. The mystery at the heart of the novel stems from Tal's father's disgrace: Judge Oliver Garland (a Robert Bork meets Clarence Thomas type) was nominated by Ronald Reagan for a Supreme Court seat, but brought down in the Senate hearings when it was revealed that he had a friendship with Jack Ziegler, a wild-card former CIA agent now rumored to be an organized crime kingpin. When the judge dies of what looks like a heart attack and Ziegler turns up at his funeral, Tal is initiated into a quest to uncover mysterious "arrangements" his father made in the event of his untimely demise. Various shady entities observe Tal chasing down the judge's clues, which include a cryptic note ("you have little time.... Excelsior! It begins!") and derive from chess strategy. Meanwhile, Talcott is going through a rough patch: his wife, Kimmer, a high-powered attorney, is probably cheating on him, his Elm Harbor law school colleagues are suspicious of him and a fake FBI man is following him around. As Talcott digs deeper, he uncovers a vein of corruption that runs all the way to the top, and his own life becomes threatened. This thriller, which touches electrically on our sexual, racial and religious anxieties, will be the talk of the political in-crowd this summer.