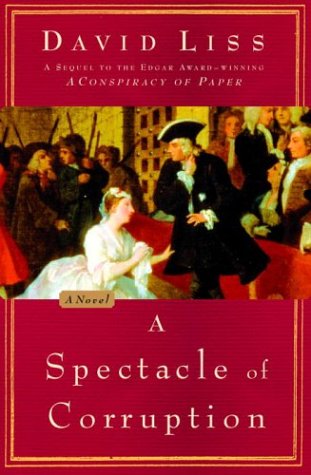 A SPECTACLE OF CORRUPTION

This sequel to Liss's Edgar Award–winning (2000) brings back ex-pugilist Benjamin Weaver and his 18th-century London environs in all their squalid glory. Benjamin has become a "thieftaker," a sort of bounty hunter/private eye, and is investigating the simple case of a threatening letter when he is caught up in a riot, accused of murder and sentenced to hang. After a gutsy escape, he sets about unraveling the mystery of who framed him and why. Donning the disguise of a wealthy coffee planter from Jamaica, Benjamin infiltrates the upper classes, where he encounters a plot centering on a hotly contested House of Commons election. There is much explanation (perhaps too much) of the history and philosophies of the Whig, Tory and Jacobite parties, but this is nicely balanced with Benjamin's forays into London's underbelly, where he has his way with the ladies and dodges dangerous louts looking to kill him. The real fun is the re-creation of the streets of London ("He fell into the alley's filth—the kennel of emptied chamber pots, bits of dead dogs gnawed on by hungry rats, apple cores and oyster shells") and the colorful denizens thereof. Many hours are spent in innumerable coffeehouses, with Benjamin and company imbibing coffee, chocolate, ale, wine and that great destroyer of the poor, rotgut gin, and employing such useful swear words as "shitten stick," "arse pot" and "bum firking." Mystery and mainstream readers with a taste for gritty historical fiction will relish Liss's glorious dialogue, lively rogues, fascinating setting and indomitable hero.