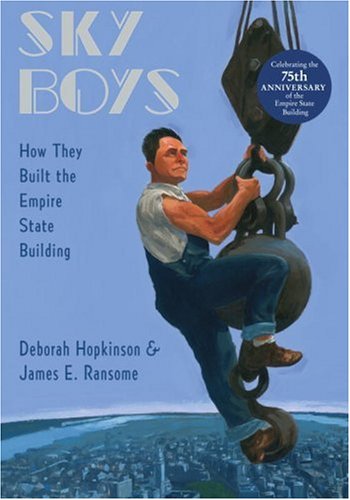 Sky Boys: How They Built the Empire State Building

A second-person narrative voice places readers at the construction site of (at that time) the world's tallest skyscraper. From the first line, "It's the end of winter,/ and your pop's lost his job," the grim realities of the Depression form the story's backdrop. Opening spreads show a boy collecting firewood from "that old hotel/ they tore down at/ Thirty-fourth and Fifth." Hopkinson ( ) infuses an emotional charge in her dramatization of the building's erection ("a symbol of hope/ in the darkest of times"), while also folding technical details into lyrical prose: "First come rumbling flatbed trucks,/ bundles of steel on their backs,/ like a gleaming, endless river/ surging through/ the concrete canyons of Manhattan." Ransome's oil paintings, in hues of blue, gray and russet brown, capture the scale and increasing elevation at which the "sky boys" worked. Framed against white clouds, men stand precariously on steel scaffolding. One spread, divided into vertical quarters, shows the building's progress in June, July, August and November; the next, a climactic vertical spread, boldly labeled "5:42 pm March 18, 1931," depicts workers stationed on the pinnacle mast, an American flag billowing behind them. Photographs of the site's actual construction decorate the endpapers, and an endnote offers even more details. The subplot about the father and son (who tour the completed building at the book's close) seems tacked on, but the drama of the building's rise makes for a literally riveting account. Ages 4-9.