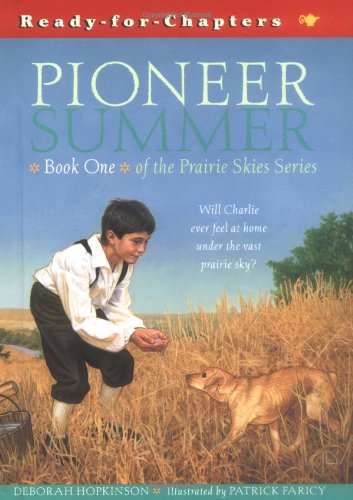 Hopkinson () introduces the Prairie Skies trilogy with this solid chapter book set in 1855. After the passage of the Kansas-Nebraska Act, eight-year-old Charlie's abolitionist parents decide to move their three children from Massachusetts to Kansas. Members of the New England Emigrant Aid Company, they hope to help vote that western territory into the Union as a free state. Distraught that he must leave his aging dog and beloved grandfather, Charlie is partially consoled by his grandfather, who gently and eloquently reassures him that the Kansas sky is the same sky that covers Massachusetts: "If you ask me, the sky's a lot like love. It just spreads out over folks no matter how far apart they are." The author delivers several suspenseful plot twists along with the historical facts. Charlie almost falls through the ice on a frozen pond, loses track of his younger sister while minding her during their journey west and helps extinguish a prairie fire that threatens their half-built cabin. Distinguished by taut sentences well tailored to the audience, this informative tale rolls at a promising clip. Illustrations not seen by . Ages 6-9.