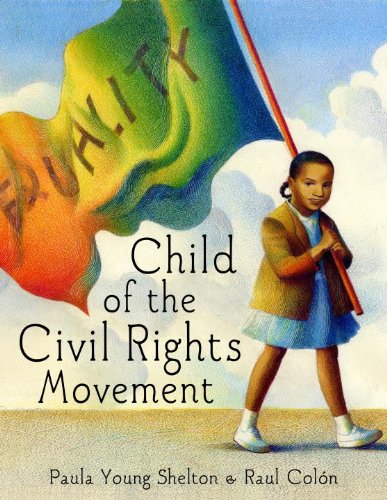 Child of the Civil Rights Movement

In her debut picture book, Shelton, a daughter of Andrew Young (activist, politician, and former U.N. ambassador), taps into her memories and those of her father, two older sisters, and others to offer a child's perspective of “the family of the civil rights movement.” She recalls her parents, native Southerners, moving their family from New York to Georgia to help combat erupting racial violence (“At first, I thought Jim Crow was a big black crow/ that squawked whenever a black person/ tried to get a good seat”). Shelton smoothly threads together personal anecdotes: being turned away from a restaurant; listening from under the table as her parents, Martin Luther King Jr., and other activists gather (“With everyone trying to talk at once,/ I thought they sounded just like/ instruments tuning up before a concert”); and participating as a four-year-old in the Selma-Montgomery march. Colón's ( ) soft-focus art features his customarily rich textural backdrop of speckles, scratches, and waves. Both contributors evoke the drama and emotion of the times (while avoiding the violence) and a triumphal sense of community and family. Ages 4–8.