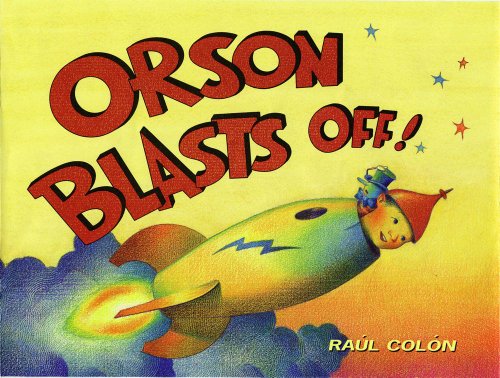 Imagination takes flight in Colón's ( ) familiar but pleasantly illustrated dream story, which begins when a boy's computer crashes. "I'm bored already!" moans Orson, at which point a jack-in-the-box next to his nightstand pops to life. "Excuse me, sir," says the toy, speaking in a deferential servant's voice. "It is I, Weasel. May I kindly ask you to step outside?" "I don't outside," Orson grumbles, but when he looks out expecting a hot July day, he sees snow on the ground. Delighted, he straps tennis-racquet snowshoes onto his feet, tucks Weasel into a backpack and explores an Arctic landscape populated with walruses and a polar bear (which readers will recognize from his bedroom décor). When he and Weasel go adrift on an ice floe, he's saved by a whale's tail (another element from his bedroom posters) and later "blasts off" into a universe of basketball planets and a ladle in place of the Big Dipper. Finally he wakes up in his own bed. "I guess I'll go play... outside," he says. The tale unfolds in dialogue, with black type representing Orson's voice and blue type standing in for Weasel's. An unnecessary glossary to define expressions like "North Pole" and "black hole" unfortunately points up the shortcomings of the unconvincing fantasy. On the other hand, Colón's rainbow of warm watercolor and pencil hues on textured paper, and his illusory images backlit with a yolky, golden yellow, emphasize the appeal of good old-fashioned make-believe over electronic games. Ages 4-8.