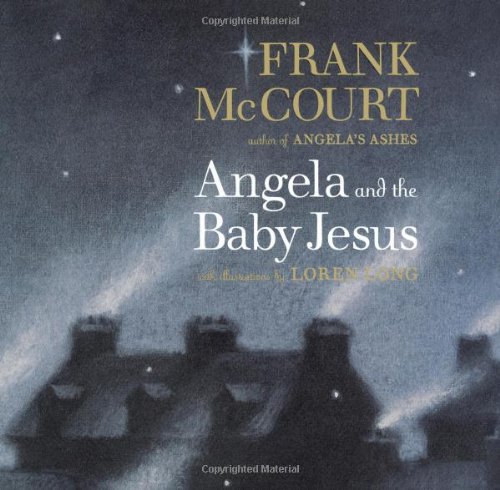 Angela and the Baby Jesus

Not one but two editions suffice to publish this sure crowd-pleaser by the celebrated McCourt, inspired by a childhood experience of the mother made famous in . The plot can be reduced to anecdote: six-year-old Angela worries that the Baby Jesus feels cold in the crèche at the church, so she devises a way to smuggle him home and warm him. In McCourt's hands, however, the story opens a child's view onto a vast world that takes scant notice of her, where “people passing by were not in the mood to be looking at a little girl carrying something white in the dark,” and where she is considered too young to have anything of interest to say, even at home. Angela negotiates with unmistakably childlike logic: frustrated at her difficulty in getting the Baby Jesus over the garden wall (an improvised part of her scheme), she scolds him with empty threats: “ 'Baby Jesus, I have a good mind to leave you there in Mrs. Blake's backyard.' But she couldn't. If God found out, he'd never let her have a sweet or a bun for a whole week.” Rarely, McCourt risks inviting a laugh at Angela's expense (Angela continues, “You're not to be flying around like an angel”), but otherwise he brings consummate skill to his layering of different types of authenticity (in Angela's thinking, in the reactions to the inevitable discovery of the Baby Jesus), and evokes a potent mix of emotions.

Given a traditional storybook format and charged with illustrating a children's edition, Colón ( ) employs his signature, multi-step watercolor and lithograph pencil technique, patterning the colors and surfaces to suffuse the story with warmth and light. The effect stops just short of nostalgic, to hint at a timeless if imperfect past. Candles in the church, streetlamps, a barely seen fire in the hearth all bathe Angela in a steady glow that emphasizes the spiritual dimension of the story. No incidental players stroll into these scenes, and the focus remains on Angela; not even Angela's mother can be seen unobstructed.

Long, ranging far from his illustrations for and , interprets the story with an almost foreboding air, as if giving a form to Angela's trepidation and awareness of her own insignificance. The adult edition, produced in a small, square gift format, suggests the atmosphere of , beginning with the cover illustration of chimneys spewing smoke into an evening sky, and continuing with the stony palette of grays and blues rendered in grainy acrylics. Already dark pictures make dramatic use of shadow—sometimes to conceal, sometimes to announce a character's presence. Readers never see Angela's face, and most of the characters, too, are shown with their backs to viewers, sometimes from an even more distancing mid-air perspective. McCourt's humor seems harder to locate in this version; on the other hand, the tender ending comes as more of a surprise. All ages.