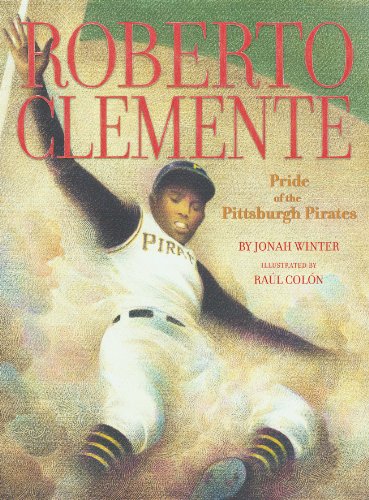 Winter's ( ) uneven narrative offers an overview of baseball great Clemente. The opening spreads introduce Roberto as a child in Puerto Rico, with "very little/ but a fever to play/ and win at baseball." He made a bat from a guava tree branch and fashioned a glove from a coffee-bean sack. The narrative quickly moves to Pittsburgh, where Clemente played for the Pirates, and his finesse on the field helped this last-place team go on to win the World Series his first season there (unfortunately, the text does not specify which year). Fueling the player's desire to excel at the game, Winter suggests, was the fact that although adored by his fans, Clemente did not receive respect or credit from American sportswriters (" 'It's because I'm black, isn't it?"/ .../ It's because I am Puerto Rican,' " he asks the "sneering reporters"). The narrative highlights his "one-man show" during the 1971 World Series, in which the Pirates beat the favored Baltimore Orioles, and his 3,000th hit in 1972. Clemente's story ends tragically when his plane crashed as he headed to Central America to aid earthquake victims there. Rendered in watercolor, colored pencils and litho pencils, Colón's ( ) art is inconsistent, juxtaposing evocative, richly textured and warmly hued paintings with less successful pen-and-inks. For baseball fans, this spotty biography leaves out many of the tantalizing details on the field, while newcomers may find Clemente's personality curiously distant and vague. Ages 4-8.