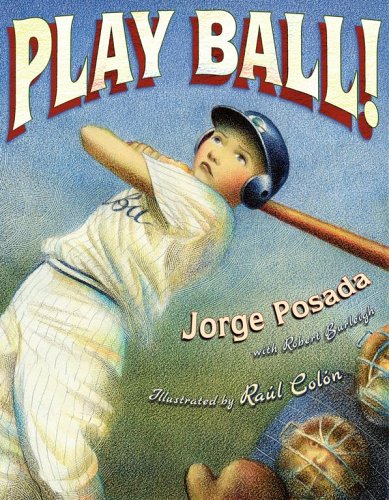 This fragmented account of New York Yankees catcher Posada's early ball-playing in his native Puerto Rico opens as the boy struggles to learn to bat left-handed in order to fulfill his father's wish that he become a switch-hitter. " isn't ," insists Jorge's father after his discouraged son asserts that he is already good at batting right-handed. A series of abrupt transitions show the lad playing ball with his pals, practicing batting left-handed on his own and then again with the coach of his team. The scene suddenly shifts to New York, where the Posada family attends a game at Yankee Stadium and Jorge vows, "Some day I'm going to play here." A turn of the page reveals the boy back home, playing in a game against his team's archrivals (coached by his father), where his attempts at batting lefty fail miserably—until he hits a game-winning double in the ninth inning. Though the story offers insight into Posada's childhood baseball experiences and testifies to the rewards of perseverance, the disjointed narrative may confuse youngsters. Colón's ( ) textured paintings, rendered in watercolors, colored pencils and litho pencils, on the other hand, capably convey the action on-the-field as well as close-up portraits that depict Jorge's frustration, determination and concentration. Ages 6-10.