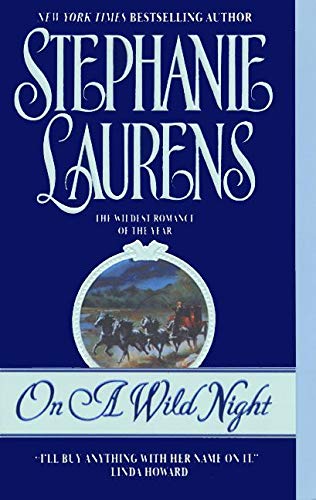 ON A WILD NIGHT

Veteran romance author Laurens adds to her early 19th-century Cynster family saga with this highly sensual tale featuring 23-year-old Amanda Cynster, cousin of the six former rogues who starred in Laurens's earlier entries (, etc.). After six years on the marriage mart, Amanda and her twin, Amelia, despairing of ever finding the right mate, have decided to broaden their search. While browsing for prospects in a notorious gaming hell, Amanda encounters Martin Fulbridge, fifth earl of Dexter. Banished from England by his father for a murder he didn't commit, Martin eschews London's elite circles and has been living abroad for the past 10 years. Nevertheless, he finds himself playing the part of Amanda's protector as she flits from one disreputable venue to another in a spurious quest for adventure. Inevitably, Amanda is "compromised," but she's unwilling to settle for anything less than a marriage based on love. The solving of the 10-year old murder mystery, though hasty, doesn't detract from the primary players and their witty repartee, but newcomers to the series may be put off by Amanda's anachronistic behavior (she has sex with Martin out of wedlock and frequently goes about without a chaperone). Still, readers will relish Laurens's spunky heroine and sizzling love scenes.