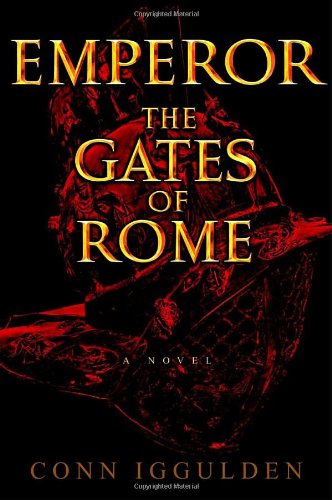 EMPEROR: The Gates of Rome

If the Roman Empire had taken as long to rise and fall as this novel takes to discover a main character and a plot, most of the world would still be wearing togas today. The story, such as it is, revolves around two boys: Gaius, the broody son of a wealthy senator, and Marcus, a prostitute's mischievous child who is reared as Gaius's brother and trained with him in the arts of war. Before the two boys reach majority, they are thrust into adulthood by the untimely death of Gaius's father and take up residence in Rome with Gaius's uncle Marius, a powerful consul who is vying with Sulla for control of the Republic. When Marcus is 14, he joins the Fourth Macedonian Legion to earn his fortune; Gaius remains by his uncle's side. Iggulden lingers long over boyhood pranks, trying the reader's patience; the pace picks up only halfway through the novel. Frequent fight scenes, ranging from individual combat to full scale battles, liven the mix somewhat, but the cartoon-like ability of the characters to bounce back after a few stitches weakens the effect. Though Iggulden has a solid grounding in Roman military history, anachronisms in speech and attitude ("Cabera took him outside and gave him a hiding") roll underfoot and trip up authenticity. A major twist toward the end reveals the protagonists to be two of Roman history's best-known figures, but readers with some knowledge of the period will have guessed their identities already. This is ultimately little more than a protracted introduction to a bigger story, which Iggulden will surely go on to tell.