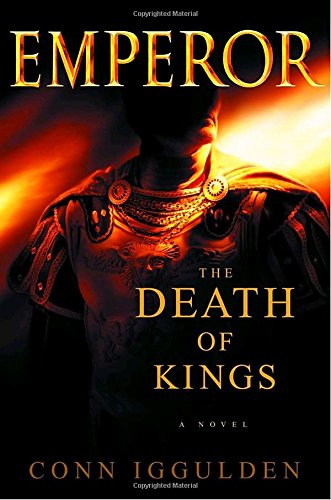 EMPEROR: The Death of Kings

After what was in effect a preamble— (2003)—Julius Caesar takes center stage in this second fast-moving, action-oriented installment in Iggulden's projected four-book retelling of the Roman emperor's saga. Julius, a rising young officer assigned to the Roman-controlled northern coast of Africa, distinguishes himself in a bloody raid on the fortress of Mytilene only to have his transport ship captured by pirates. He and the crew are thrown into the hold to rot while awaiting a ransom that will likely ruin his young family back in Rome. After the ransom arrives, Julius gathers his loyal men and marches along the coast, impressing the locals (pirate collaborators all) into military service. He makes good on his bloody promise to wipe out the pirates, then takes his forces to Greece, where, at long odds, he defeats old king Mithridates, who is leading an insurrection that threatens Roman rule in all of Greece. Julius returns to Rome victorious and rich—only to find that the corruption and thuglike violence at the heart of the Republic has come near to destroying those he holds dear, including his wife and small daughter. Those looking for depth of character may be disappointed that Julius Caesar is pictured as little more than a man gripped by driving ambition. Iggulden does a better job in weaving an intricate and compelling tapestry of Roman underling and slave life, with several well-developed minor characters whose craftiness, loyalty and heroics far overshadow those of their social betters.