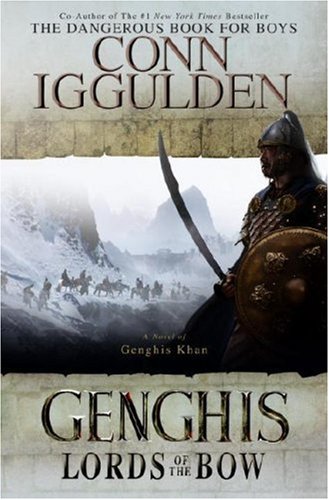 Genghis: Lords of the Bow

Iggulden, coauthor of the megaseller , continues his masterful series on Genghis Khan (following ) with another vividly imagined chapter. In the debut volume, the Great Khan rises from the barren plains of central Asia to unify the scattered Mongol tribes into a nation. Here, Genghis turns to the conquest of the “bloated, wealthy” cities of the Chin, or Chinese, Kingdom. Aided by his brothers Kachiun and Khasar, Genghis strikes first against the Xi Xia Kingdom south of the Gobi Desert—a route into China that circumvents the Great Wall. The Mongols’ insatiable quest to conquer drives the narrative, but Iggulden deftly weaves several intriguing character-driven subplots into the saga, including tales of sibling rivalry between Genghis’s two eldest sons and the cupidity of a powerful and enigmatic shaman. Borrowing from history and legend, Iggulden reimagines the iconic conqueror on a more human scale—larger-than-life surely, but accessible and even sympathetic. Iggulden’s Genghis series is shaping up as a triumph of historical fiction.