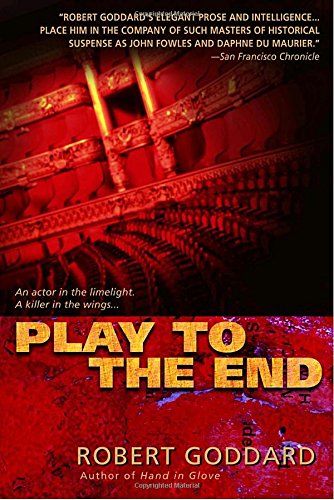 Play to the End

A moderately successful actor gets caught up in the role of a lifetime in this gripping thriller from British bestseller Goddard ( ). Playing the lead in a recently discovered play by the late Joe Orton that's trying out in Brighton, Toby Flood—whose last chance at fame came when he was briefly considered to take over the role of James Bond after Roger Moore stepped down—gets a call from his soon-to-be-ex-wife, Jenny, who lives in Brighton. She's being stalked by a strange man who hangs around in the cafe opposite her hat shop, and she thinks Toby might be involved because the stalker has been seen with a video copy of one of his films. Toby, still very much in love with Jenny, agrees to help—and finds himself in a dangerous, unpredictable tangle of outright lies and hidden truths about disputed ancestry and industrial immorality. "Reality doesn't often intrude into the life of an actor," Toby says as the suspense tightens. "Pretence is all, off stage as well as on. For me, though, that had changed. Utterly."