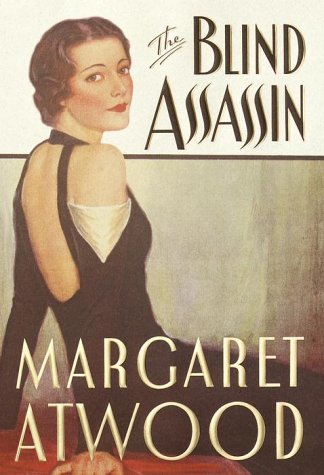 Family secrets, sibling rivalry, political chicanery and social unrest, promises and betrayals, ""loss and regret and memory and yearning"" are the themes of Atwood's brilliant new novel, whose subtitle might read: The Fall of the House of Chase. Justly praised for her ability to suggest the complexity of individual lives against the backdrop of Canadian history, Atwood here plays out a spellbinding family saga intimately affected by WWI, the Depression and Communist witch-hunts, but the final tragedy is equally the result of human frailty, greed and passion. Octogenarian narrator Iris Chase Griffen is moribund from a heart ailment as she reflects on the events following the suicide in 1945 of her fey, unworldly 25-year-old sister, Laura, and of the posthumous publication of Laura's novel, called ""The Blind Assassin."" Iris's voiceDacerbic, irreverent, witty and cynicalDis mesmerizingly immediate. When her narration gives way to conversations between two people collaborating on a science fiction novel, we assume that we are reading the genesis of Laura's tale. The voices are those of an unidentified young woman from a wealthy family and her lover, a hack writer and socialist agitator on the run from the law; the lurid fantasy they concoct between bouts of lovemaking constitutes a novel-within-a-novel. Issues of sexual obsession, political tyranny, social justice and class disparity are addressed within the potboiler SF, which features gruesome sacrifices, mutilated body parts and corrupt, barbaric leaders. Despite subtle clues, the reader is more than halfway through Atwood's tour de force before it becomes clear that things are not what they seem. Meanwhile, flashbacks illuminate the Chase family history. In addition to being psychically burdened at age nine by her mother's deathbed adjuration to take care of her younger sibling, na ve Iris at age 18 is literally sold into marriage to a ruthless 35-year-old industrialist by her father, a woolly-minded idealist who thinks more about saving the family name and protecting the workers in his button factories than his daughter's happiness. Atwood's pungent social commentary rings chords on the ways women are used by men, and how the power that wealth confers can be used as a deadly weapon. Her microscopic observation transforms details into arresting metaphors, often infused with wry, pithy humor. As she adroitly juggles three plot lines, Atwood's inventiveness achieves a tensile energy. The alternating stories never slacken the pace; on the contrary, one reads each segment breathlessly, eager to get back to the other. In sheer storytelling bravado, Atwood here surpasses even The Handmaid's Tale and Alias Grace. BOMC main selection; author tour. (Sept.)
close
Details