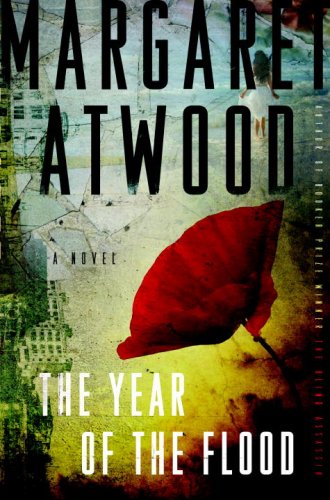 In her 2002 speculative novel, , Margaret Atwood depicted a dystopic planet tumbling toward apocalypse. The world she envisaged was in the throes of catastrophic climate change, its wealthy inhabitants dwelling in sterile secure compounds, its poor ones in the dangerous “pleeblands” of decaying inner cities. Mass extinctions had taken place, while genetic experiments had populated the planet with strange new breeds of animal: liobams, Mo'Hairs, rakunks. At the end of the book, we left its central character, Jimmy, in the aftermath of a devastating man-made plague, as he wondered whether to befriend or attack a ragged band of strangers. The novel seemed complete, closing on a moment of suspense, as though Atwood was content simply to hint at the direction life would now take. In her profoundly imagined new book, , she revisits that same world and its catastrophe.

Like , begins just after the catastrophe and then tracks back in time over the corrupt and degenerate world that preceded it. But while the first novel focused on the privileged elite in the compounds and the morally bankrupt corporations, depicts more of the world of the pleebs, an edgy no-man's land inhabited by criminals, sex workers, dropouts and the few individuals who are trying to resist the grip of the corporations.

The novel centers on the lives of Ren and Toby, female members of a fundamentalist sect of Christian environmentalists, the God's Gardeners. Led by the charismatic Adam One, whose sermons and eco-hymns punctuate the narrative, the God's Gardeners are preparing for life after the prophesied Waterless Flood. Atwood plays some of their religion for laughs: their hymns have a comically bouncing, churchy rhythm, and we learn that both Ren and Toby have been drawn toward the sect for nonreligious reasons. Yet the gentleness and benignity of the Gardeners is a source of hope as well as humor. As absurd as some of their beliefs appear, Atwood seems to be suggesting that they're a better option than the naked materialism of the corporations.

This is a gutsy and expansive novel, rich with ideas and conceits, but overall it's more optimistic than . Its characters have a compassion and energy lacking in Jimmy, the wounded and floating lothario at the previous novel's center.

Each novel can be enjoyed independently of the other, but what's perhaps most impressive is the degree of connection between them. Together, they form halves of a single epic. Characters intersect. Plots overlap. Even the tiniest details tessellate into an intricate whole. In the final pages, we catch up with Jimmy once more, as he waits to encounter the strangers. This time around, Atwood commits herself to a dramatic and hopeful denouement that's in keeping with this novel's spirit of redemption.