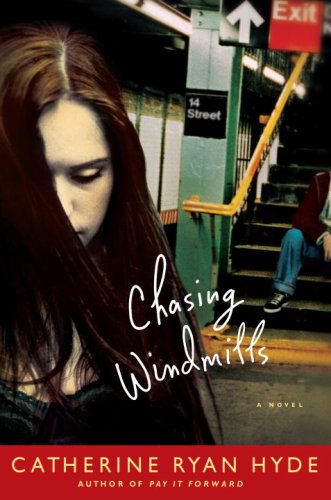 In the simple and captivating latest from author Hyde, a chance encounter proves life-changing for two lonely New York City subway riders. Four months shy of 18, Sebastian Mundt has been held a virtual prisoner by his father since his mother died: his father home-schools him and doesn't let him have outside relationships. One night, with his father heavily sedated by his sleeping pill, Sebastian sneaks out to ride the subway and locks eyes with Maria Arquette, a young mother who is caught in an abusive marriage. The two share an instant connection and take to meeting on the subway almost nightly and tentatively planning a future in the California desert town that Sebastian remembers from childhood, where thousands of windmills stretch out across the horizon. Hyde gracefully alternates between Sebastian's and Maria's perspectives with gentle nods to this New York love story's precursors (Maria obsessively watches ). It is their voices—at once utterly credible and heartbreakingly naïve—that make the book, and while this is being billed as an adult novel, its closest stylistic relative is S.E. Hinton's YA classic .