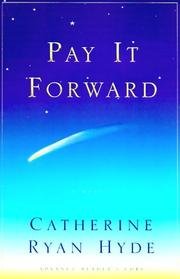 An ordinary boy engineers a secular miracle in Hyde's (Funerals for Horses) winning second novel, set in small-town 1990s California. Twelve-year-old Trevor McKinney, the son of Arlene, a single mom working two jobs, and Ricky, a deadbeat absentee dad, does not seem well-positioned to revolutionize the world. But when Trevor's social studies teacher, Reuben St. Clair, gives the class an extra-credit assignment, challenging his students to design a plan to change society, Trevor decides to start a goodwill chain. To begin, he helps out three people, telling each of them that instead of paying him back, they must ""pay it forward"" by helping three others. At first, nothing seems to work out as planned, not even Trevor's attempt to bring Arlene and Reuben together. Granted, Trevor's mother and his teacher are an unlikely couple: she is a small, white, attractive, determined but insecure recovering alcoholic; he is an educated black man who lost half his face in Vietnam. But eventually romance does blossom, and unbeknownst to Trevor, his other attempts to help do ""pay forward,"" yielding a chain reaction of newsworthy proportions. Reporter Chris Chandler is the first to chase down the story, and Hyde's narrative is punctuated with excerpts from histories Chandler publishes in later years (Those Who Knew Trevor Speak and The Other Faces Behind the Movement), as well as entries from Trevor's journal. Trevor's ultimate martyrdom, and the extraordinary worldwide success of his project, catapult the drama into the realm of myth, but Hyde's simple prose rarely turns preachy. Her Capraesque theme--that one person can make a difference--may be sentimental, but for once, that's a virtue. $250,000 ad/promo; BOMC and QPB alternates; 7-city author tour; film rights optioned by Warner Bros. (Feb.)
close
Details