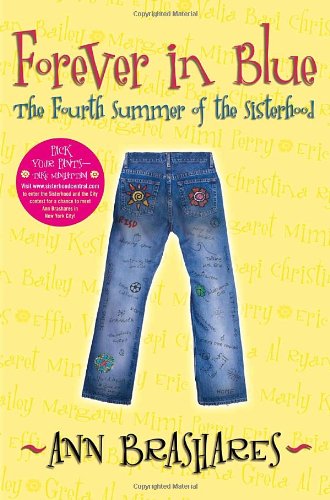 Forever in Blue: The Fourth Summer of the Sisterhood

Carmen, Lena, Bridget and Tibby may not be forever in blue jeans, but they do share the Traveling Pants for at least one more summer. Fans rejoin the foursome just after their freshman year in college. Carmen is attending a summer theater program in Vermont, where she unexpectedly lands a plum role and must contend with her roommate's attempts to sabotage her performance. Enrolled in a summer painting class at Rhode Island School of Design, Lena falls for a fellow student and also receives a surprise visit (his specialty) from Kostos, her former Greek beau. On an archeological dig in Turkey, Bridget finds herself attracted to a professor (who's married). And Tibby, in the most poignant story line, becomes reclusive while taking film classes at NYU, and breaks up with her devoted boyfriend, Brian, after their first sexual encounter results in a pregnancy scare. Brashares credibly recounts the emotional turmoil surrounding the girls' love, peer and family tribulations. There is just passing mention of "the Pants" and their special powers until novel's end, when the jeans, through a rather unlikely set of circumstances, disappear in Greece—an event that bands the four friends together in a countrywide search. The series' legion followers will eagerly follow each gal through her summer of ups and downs and will again be heartened by the teens' rock-solid friendship. Ages 12-up.