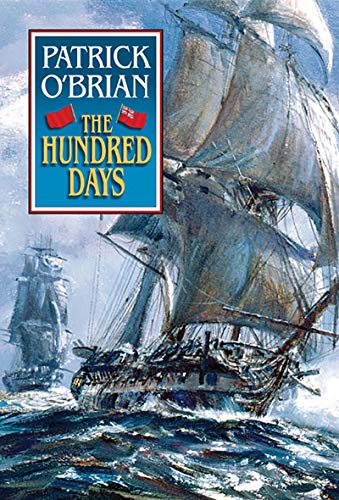 The Aubrey-Maturin series (The Commodore, etc.) nears the two dozen mark the way it began, with colorful historical background, smooth plotting, marvelous characters and great style. The title refers to Napoleon's escape from Elba and brief return to power. Capt. Jack Aubrey must stop a Moorish galley, loaded with gold for Napoleon's mercenaries, from making its delivery. The action takes us into two seas and one ocean and continues nearly nonstop until the climax in the Atlantic. We're quickly reacquainted with the two heroes: handsome sea dog Jack Aubrey, by now a national hero, and Dr. Stephen Maturin, Basque-Irish ship's doctor, naturalist, English spy and hopelessly incompetent seaman. Nothing stays the same, alas: Jack has gained weight almost to obesity, and Stephen is desolated by the death of his dashing, beautiful wife--but they're still the best of friends, each often knowing what the other is thinking. The prose moves between the maritime sublime and the Austenish bon mot (""a man generally disliked is hardly apt to lavish good food and wine on those who despise him, and Ward's dinners were execrable""). There are some favorite old characters, notably Aubrey's steward, Preserved Killick: ""ill-faced, ill-tempered, meagre, atrabilious, shrewish"" and thoroughly amusing. Chief among entertaining newcomers is Dr. Amos Jacob, a Cainite Jew (""they derive their descent from the Kenites, who themselves have Abel's brother Cain as their common ancestor""), who comes from a family of jewel merchants and has an encyclopedic grasp of Hebrew, Arabic and Turkish languages (and politics). Jacob is as expert as Stephen at spying and even more of a landlubber. O'Brian continues to unroll a splendid Turkish rug of a saga, and if it seems unlikely that the sedentary Stephen would hunt lions in the Atlas mountains (with the Dey of Algiers!), O'Brian brings off even this narrative feat with aplomb. (Oct.)
close
Details