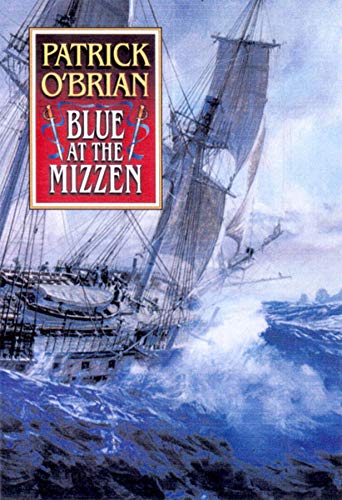 Blue at the Mizzen

With bittersweet pleasure, readers may deem this 20th--and possibly final--installment in O'Brian's highly regarded series featuring Capt. Jack Aubrey of the English Royal Navy and Stephen Maturin, ship's doctor, the best of the lot. Post-Waterloo, the frigate Surprise sets sail to South America as a ""hydrographical vessel,"" ostensibly to survey the Straits of Magellan and Chile's southern coast. In fact, Jack and Stephen are to offer help to the Chilean rebels trying to break free from Spain. On their way down the coast of West Africa, romance blossoms for both men. Jack's liaison (with his cousin, Isobel, in Gibraltar) is brief, but widower Stephen's passion for Christine Wood, a naturalist who has been his correspondent for some time, turns serious in Sierra Leone. The doctor's correspondence with Christine begins with accounts of his explorations in Africa and South America, referencing, say, an ""anomalous nuthatch"" or the ""etymology of doldrum,"" but they're quite wonderful love letters, functioning as a chorus to the action. Once in Chile, despite the conflict between opposing rebel camps, Jack leads a successful raid on a treasure fort in Valdivia, followed by the seizure of a Peruvian frigate to be turned over to the Chilean rebels, triumphs that reap him a just reward; at that point, readers will learn the title's significance. Throughout, familiar characters abound and entertain, especially the amusingly nasty steward, Killick, and Stephen's ""loblolly girl"" (nurse), Poll Skeeping. And finally, there is Horatio Hanson, bastard son of a nobleman, who comes on board as a midshipman, a dashing young foil for the ship's elders. O'Brian has rightfully been compared to Jane Austen, but one wonders if even she would have done justice to ""those extraordinary hollow dwellings, sometimes as beautiful as they were comfortless."" To use one of Stephen's favorite expressions, ""What joy!"" Agent, Georges Borchardt. (Nov.) FYI: Over three million copies of the books in the Aubrey/Maturin series have been sold. O'Brian will make two mid-November appearances in New York, one already sold out. (Nov.)
close
Details