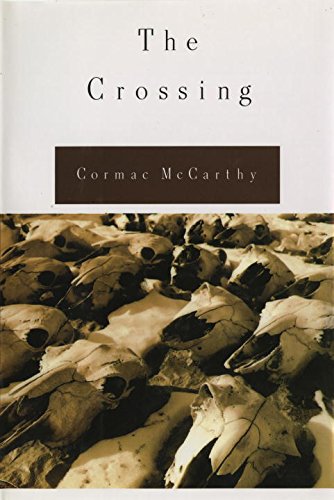 Young Billy Parham, in a horse stall, dreams of his father's eyes, ``those eyes that seemed to contemplate with a terrible equanimity the cold and the dark and the silence that moved upon him.'' Billy could as well be dreaming of McCarthy's prose and the unsparing tone of this, the second volume in the Border Trilogy. The Crossing , following the award-winning and bestselling All the Pretty Horses , is set in the American Southwest and in Mexico, and features, like its predecessor, teenage boys, their horses, a girl and the recurring spectacles of desert days and nights, awful wonders and appalling deprivations, and no small amount of roadside philosophizing. The story of Billy, his younger brother Boyd, the fates of their horses, a wolf, their parents and their dog, set against a vague and distant backdrop of the coming Second World War, throws little light upon a universe without much meaning, though it is in the nature of McCarthy characters to try to anyway. In the end, when the last dog is hanged, so to speak, what survives is the rhythm of McCarthy's open, ropey sentences circling a logic as inscrutable as an animal's or a god's. Although no mysteries are solved, and no comfort gained for these lonely characters, there is that language wrestling to earth all that it cannot know and all that it can. Readers again will be in awe of McCarthy's extraordinary prose attentions--the biblical cadences, the freshened vocabulary, the taut, vivid renderings of the struggle to live. 200,000 first printing; BOMC main selection. (June)
close
Details