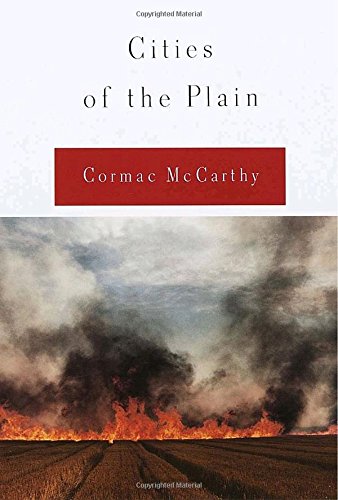 Cities of the Plain

This volume concludes McCarthy's Border Trilogy--the first two books being All the Pretty Horses, which won the National Book Award in 1992, and The Crossing, published to great acclaim in '94. Devoted McCarthy readers will know not to expect any neat or dramatic resolution in Cities of the Plain, for the author is more of a poet than a novelist, more interested in wedding language to experience in successive moments than in building and setting afloat some narrative ark. Cities, like the other books, takes place sometime shortly after WWII along the Texas-Mexico border. John Grady Cole, the young, horse-savvy wanderer from All the Pretty Horses, and Billy Parham, who traveled in search of stolen horses with his younger brother in The Crossing, are now cowhands working outside El Paso. John Grady falls in love with Magdalena, a teenage prostitute working in Juarez, Mexico; determined to marry her, he runs afoul of her pimp, Eduardo. That is basically the narrative. Along the way, McCarthy treats the reader to the most fabulous descriptions of sunrises, sunsets, the ways of horses and wild dogs, how to patch an inner tube. The cowboys engage in almost mythically worldly-wise, laconic dialogues that are models of concision and logic. Although there is less of it here than in the earlier books, McCarthy does include a few of his familiar seers, old men and blind men who speak in prophetic voices. Their words serve as earnest if cryptic instructions to the younger lads and seem to unburden the novelist of his vision of America and its love affair with free will. If a philosophy of life were to be extracted from these tales, it would seem to be that we are fated to be whatever we are, that what we think are choices are really not; that betrayals of the heart are always avenged; and that following one's heart is a guarantee of nothing. There is not much solace in McCarthy-land; there is only the triumph of prose, endlessly renewed, forever in search of a closure it will not find save in silence. 200,000 first printing; BOMC alternate; simultaneous audio, read by Brad Pitt. (May)
close
Details