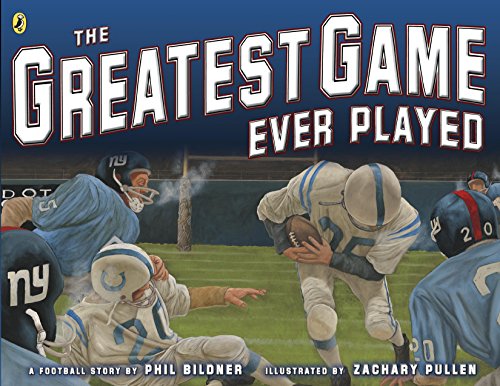 The Greatest Game Ever Played

Deftly blending surefire ingredients—nostalgia, father-son bonding and on-field action—Bildner's ( ) story tells of the 1958 championship NFL game between the New York Giants and the Baltimore Colts, played at Yankee Stadium. But before kickoff, the author provides plenty of compelling pre-game background. After Sam's father loses his factory job, he finds new work with longer hours, and he and his son can no longer attend the games of their beloved New York Giants baseball team. Then comes the devastating news that the Giants are relocating to California. Sam, who sells newspapers at a local store, begins reading about the "other" New York Giants and follows their games on the radio, but Pop appears to have no interest in football. When Sam's boss must let him go, he hands the lad tickets to the championship game, and thus treats father and son to the sports event of a lifetime (despite the fact that the Giants end up losing in sudden-death overtime). Sam also discovers that his father knows far more about these Giants than he has let on. Bildner's informative afterword emphasizes the significance of this game in football history, especially its role in kicking the sport into the national spotlight. Pullen ( ) nicely showcases the big names of the era (Unitas and Berry, Gifford and Huff, etc.). An intriguing balance of realism and caricature, his artwork scores a win, especially with its evocations of the ingenuous protagonist's profound emotions. Ages 5-up.