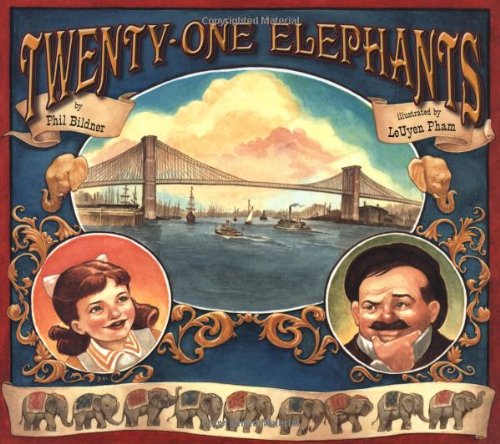 Bildner's ( ) appealing tale celebrates the building of the Brooklyn Bridge, as well as the perseverance of a girl determined to walk across it. During the first years of her life, Hannah watches, fascinated, as workers begin to construct the world's first steel suspension bridge. "She dreamed of the day when she would finally be able to walk across it and out into the big city." Yet Hannah's father insists that this "metal monster" cannot possibly be safe—even after the bridge's chief engineer, Emily Roebling, rides across it in a horse-drawn carriage. Pham's ( ) detailed, realistic watercolors chart the architectural wonder's slow rise outside the girl's window, while the full-bleed three-quarter spreads depict 19th-century Brooklyn's buildings and streets. Hannah's other family members, teachers and townsfolk echo her father's skepticism and voice suspicion that the bridge "is certain to collapse," even as the heroine futilely recites facts about the bridge's strength and size. She finally has a brainstorm while watching elephants perform at the circus and asks P.T. Barnum if she can borrow his animals. "Great minds think alike, little lady," replies the showman, and a wordless spread depicts Barnum's 21 elephants triumphantly parading across the Brooklyn Bridge—a feat that finally convinces Hannah's father that "the bridge was indeed safe and strong." Bildner and Pham deftly juggle fact and fiction in this charming tale, which celebrates a child's imagination and faith. Ages 4-8.