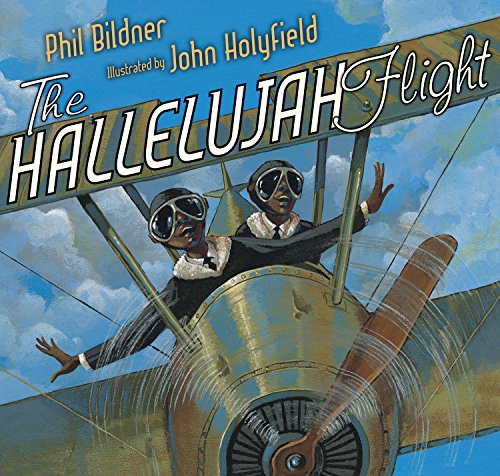 This high-spirited collaboration re-creates the historic flight of James Banning, the first African-American pilot to fly across the continental United States. Bildner (co-creator of the Sluggers series) chronicles this feat in the voice of Thomas Allen, Banning's mechanic and copilot on the 1932 flight from Los Angeles to New York City. Propelled by breezy dialogue, including repeated cries of “Hallelujah!”, the story opens as Banning announces how they'll fund the trip: those who donate food, fuel, and supplies along the way can write their names on the wings of the open-cockpit plane (“They'll fly into the history books right along with us!”). Dubbed the Flying Hoboes by skeptical colleagues, the duo completes their mission despite such hurdles as a leaky engine pump, a fierce storm, and racial prejudice. Rendered in acrylic paint, Holyfield's ( ) stylized paintings help this saga get off the ground effortlessly (night scenes, often lit in blue, take on the feel of movie posters). Especially uplifting is the image of the copilots saluting the sunlit Statue of Liberty from their plane, its wings crowded with signatures. Ages 5–8.