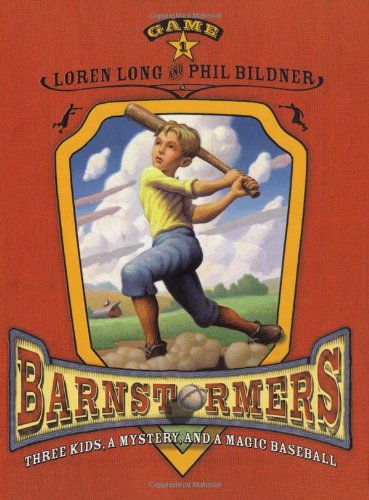 The authors nimbly step up to the plate in this debut volume of Barnstormers: Tales of the Travelin' Nine series, but the action plays out rather disappointingly. In 1899, likable siblings Griffith, Ruby and Graham Payne are on the road with a barnstorming baseball team. Their father, once the Travelin' Nine's catcher, perished at war and their mother, disguised as a man, has taken his place behind home plate. The children cherish the baseball that their father carried throughout the war. At the start of the team's game against the Cincinnati Swine (aka Porkopolis, "the pork-packin' capital of the world"), the worn ball mysteriously seems to "tremble" in Ruby's hand. As the Nine loses the lead in the game, a "looming darkness" descends on the field. A train switching signal grows out of the ground, tracks and a locomotive appear—seen only by the siblings and their teammates, who lose badly. At game's end, Griffith shares with Ruby their uncle's warning, confided at their father's funeral, that "great danger lies ahead." Like this season's (reviewed Jan. 8), this brief novel throws out appealing old-time baseball vernacular (defined in the margins) and intriguing period particulars, captured in Loren's enticing backdrops; youngsters will also enjoy the emotional portraits of the Payne family. But the danger remains a mystery as the tale comes to a close, with too much left dangling. Ages 7-10.