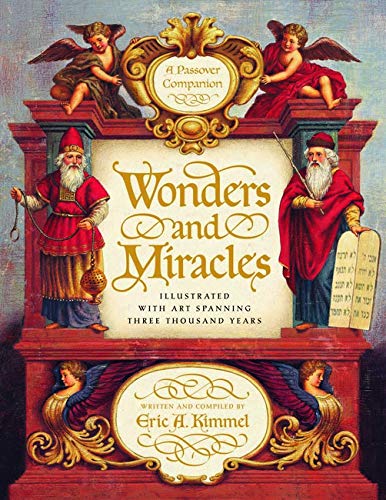 WONDERS AND MIRACLES: A Passover Companion

Handsomely produced in an 8"×11" format with a sewn-in ribbon bookmark, this lavishly illustrated compendium gathers together information about the components of the Passover seder—the rituals, prayers, songs and the words of the Haggadah (the Passover prayer book)—and weaves in stories, poems and the like from a variety of authors. Chiefly addressing people who celebrate Passover, Kimmel ( ; ) evenly incorporates the many voices by interspersing his own colorful exposition throughout. Whether he discusses a basic point (e.g., the foods that go on a seder plate) or something more philosophical (why do people remove drops of wine from their cups during the naming of the plagues visited on Egypt?), readers' attentions will be held, both by the text and by the art. The illustrations range from a 15th-century B.C.E. Egyptian mural of slaves making bricks and mortar to numerous Haggadoth dating from 13th-century France, 14th-century Spain, 17th-century Amsterdam, etc.; they also include such artifacts as a 19th-century matzoh cover from India and a contemporary clay sculpture of Miriam dancing. This beautifully designed book could take pride of place at many a Passover table. All ages.