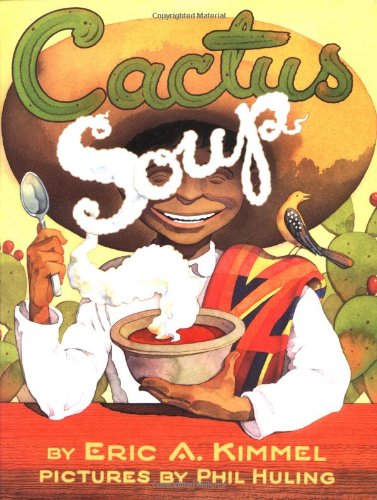 Kimmel ( ) sets his version of "Stone Soup" during the Mexican Revolution, inspiring some marvelously atmospheric watercolors by Huling ( ). Hungry soldiers encounter the poverty-feigning townsfolk of San Miguel and announce that they will make enough cactus soup for the troops and the village. And they make it from an unlikely ingredient—a single cactus thorn. By story's end, the soldiers' leader has used reverse psychology to coax genuinely tasty foodstuffs out of the villagers ("Too bad you don't have onions. Cactus soup always tastes better with onions. But why ask for what you don't have?"), and teaches everyone a delicious and festive lesson about sharing and community. Kimmel, ever the master storyteller, incorporates especially vivid cadences in the words of the wily, world-weary captain; but it's Huling who makes the story sing. His comically exaggerated characters garner laughs without shedding their humanity, while his swooping, elongated lines and radiant colors recall the sun-drenched earthiness and high spirits of early 20th- century Mexican art. Ages 4-8.