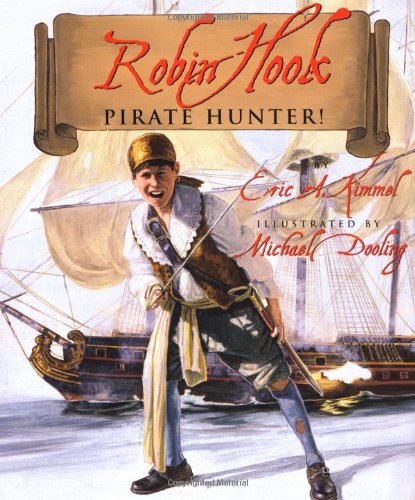 Kimmel () gleefully plunders Sherwood Forest, Peter Pan, Dr. Dolittle and pirate lore for this hybrid tale of a stout-hearted lad bent on ending piracy. Adopted as an infant by Captain James Hook, Robin develops some decidedly anti-swashbuckling traits as he grows older. "He hated making people walk the plank. He never enjoyed sinking ships. And he was kind to people and animals." Fed up, Captain Hook maroons him on an island, where Robin learns the language of animals and forms a ragtag crew of abandoned children. Their mission: to rid the seven seas of all pirates (they put itching powder in Blackbeard's beard, for instance, and erase the on Captain Flint's treasure map). Despite some holes in the plot large enough to sail a galleon through (such as where the other children on Robin's supposedly deserted island came from and why the pirates willingly release their prisoners from a sinking ship), the story cruises along, buoyed up by Dooling's () robust oil-on-canvas paintings. Some of the action sequences, like the narrative, seem more sketched than fully rendered, veiled as they are in fog and sea spray. But Dooling's portraits of the pirates capture their colorful personalities. Ages 4-8.