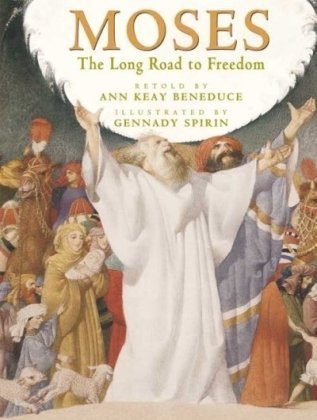 MOSES: The Long Road to Freedom

As his many admirers will anticipate, Spirin's extraordinary art is the raison d'être of this stately looking volume. Although Beneduce (previously paired with Spirin for ) writes smoothly, her text presumes familiarity with the subject (for example, it starts as Moses's mother, without any explanation, sends the baby down the Nile in a basket), but it also skirts the difficult questions. This Moses doesn't kill any Egyptians in his youth (he strikes down a guard, which displeases the pharaoh), and this God doesn't harden the pharaoh's heart. Although Beneduce enumerates the plagues in all their miseries, the exchanges aren't quite so lusty: "Now, won't you agree to let my people go?" Moses enquires of the pharaoh. But Spirin continues to outdo himself with his pencil and watercolor illustrations. He combines Western European painterly traditions with a hint of Egyptian composition. For example, in a scene of the pharaoh's daughter discovering the infant Moses, the princess and maidens are all shown in profile, on a nearly flat plane, but rendered in exquisite detail, from the folds of their diaphanous gowns to the gems in their headpieces. Framing an extract from Exodus are tiny scenes of Moses's and Aaron's visits to the pharaoh, a treatment one might find in a Renaissance painting. As always, the margins reward scrutiny with gorgeous borders (leave it to Spirin to turn frogs and locusts into works of beauty) and impossibly detailed miniatures that will have readers reaching for magnifying glasses. All ages.