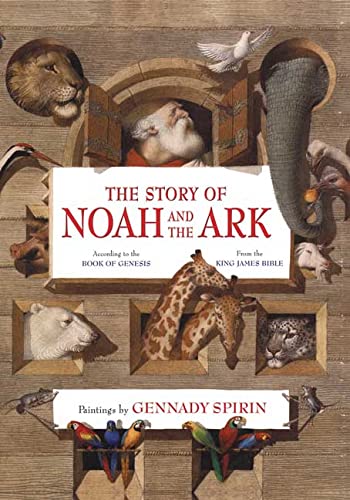 THE STORY OF NOAH AND THE ARK

With characteristically graceful watercolor-and-pencil illustrations in dusty earth tones, Spirin ( , Children's Religion Forecasts, Jan. 26) throws his hat into the substantial ring of Noah's Ark picture books. What makes Spirin's approach different is the formality of his design and style. As in his Easter and Christmas books, the language comes straight from the King James Bible. Here the passages appear as large blocks of text on several double-page spreads, framed by an image of God presumably delivering these words from the heavens, and later, featuring Noah releasing dove and raven from the ark's window (the passages are referenced in spot art as well). In each case, the text is followed by numerous pages of sweeping paintings that depict such key scenes as the roiling, ominous dark seas and clouds, the parade of animal pairs and Noah's family. Spirin's finely crafted portraits of a bearded Noah with a gentle countenance, and of creatures that appear simultaneously realistic and fantastic, beg close inspection. A poster packaged inside the back cover features three scenes from the book connected as one continuous mural—a perspective that only heightens this story's grand scope and scale. Unlike more kid-friendly retellings, the initial passages and art clearly depict God's displeasure as something to be feared, making God's generous post-flood blessing and covenant all the more moving. Neither cute nor ingratiating, this rendition of the Bible favorite is one to inspire awe. All ages.