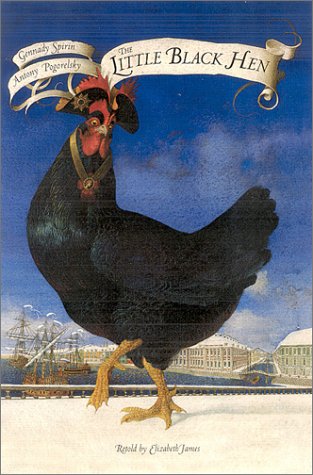 Infusing his paintings with the detail and patina of a centuries-old tapestry, Spirin () again brings soulful Russian artistry to a classic story from his native land. But this cautionary tale, written in 1829, may disquiet modern readers with its alien notions of justice and with its sometimes abrupt narrative development. Lonely at boarding school, Alyosha befriends a "hen" named Blackey (who is male, strangely) and saves him from the cook's stew pot. That night, Blackey takes Alyosha on a tour of a magical, underground world where a miniature king rewards Alyosha's kindness by granting a rashly chosen wish: "I wish I knew all the answers at school and never had to study." This disastrous choice eventually leads the boy to act haughtily in class and to break his promise to keep the kingdom a secret—which necessitates the "heartbroken" kingdom-dwellers to move far away to safety. Trudging away handcuffed, Blackey sighs, "This is my punishment for your mistake," then says that Alyosha can redeem Blackey's suffering by becoming "a kind and worthy boy again." Spirin evokes the formality of the era with period costumes and a palette of dull gray, burgundy, olive and gold tones—so muted they effectively recall age-darkened museum paintings. Wide white borders encase his ever-remarkable paintings; an oval miniature tops each page of text, which is surrounded on the remaining sides by delicate pencil drawings as opposed to the sumptuously painted details the artist's fans have come to expect. Given the subtlety of the art and the stylized story, this may be of more interest to Spirin's adult admirers than to young readers. Ages 6-11.