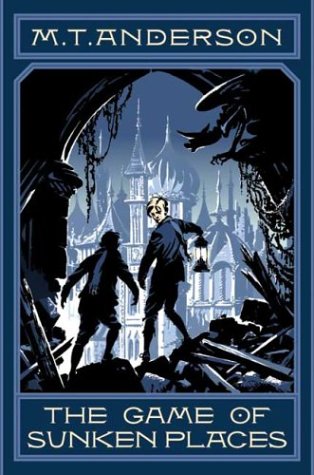 THE GAME OF SUNKEN PLACES

Anderson serves up a fantasy thriller that neatly combines the techno-savvy of his the horror themes of and the sharp humor of . Thirteen-year-olds Gregory Buchanan and Brian Thatz have accepted an invitation to stay with Gregory's Uncle Max in Vermont over their school's two-week October break. Gregory does not know Max well (he is actually the adoptive father of Max's now-adult cousin, Prudence) but warns Brian that he's "probably insane. He lives in kind of a different world from the rest of us. You know? The kind of world where electricity is a lot of invisible spiders." True to horror-story convention, locals urge the boys to turn back as they approach his estate. Max is indeed ominous, and their reception bizarre (why do the servants incinerate the boys' clothing?). Right away, the boys find a board game (from which the novel takes its title) that seems to depict Max's estate—but soon new places begin appearing on the board. Gregory and Max learn they are participants in a high-stakes Game run by the so-called Speculant; with characters like an axe-wielding troll and an infuriated elf, portentous place names (the Ceremonial Mound, the Hill of Shadow) hard-to-discover rules and riddles, the Game proceeds like an elaborate computer fantasy adventure. Anderson keeps the tension high even as he cuts it with colorful prose and an insightful motif involving the boys' friendship. Dexterously juggling a seemingly impossible profusion of elements, the author builds to a climactic series of surprises that, exploding like fireworks, will almost certainly dazzle readers. Ages 9-12.