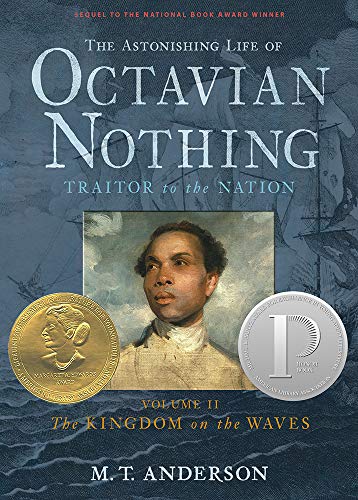 The Astonishing Life of Octavian Nothing, Traitor to the Nation: Volume II: The Kingdom on the Waves

With an eye trained to the hypocrisies and conflicted loyalties of the American Revolution, Anderson resoundingly concludes the finely nuanced bildungsroman begun in his National Book Award–winning novel. Again comprised of Octavian’s journals and a scattering of other documents, the book finds Octavian heading to Virginia in response to a proclamation made by Lord Dunmore, the colony’s governor, who emancipates slaves in exchange for military service. Octavian’s initial pride is short-lived, as he realizes that their liberation owes less to moral conviction than to political expediency. Disillusioned, facing other crises of conscience, Octavian’s growth is apparent, if not always to himself: when he expresses doubt about having become any more a man, his mentor, Dr. Trefusis, assures him, “That is the great secret of men. We aim for manhood always and always fall short. But my boy, I have seen you at least reach half way.” Made aware of freedom-fighters on both sides of the conflict (as well as heart-stopping acts of atrocity), readers who work through and embrace Anderson’s use of historical parlance will be rewarded with a challenging perspective onAmerican history. Ages 14–up.