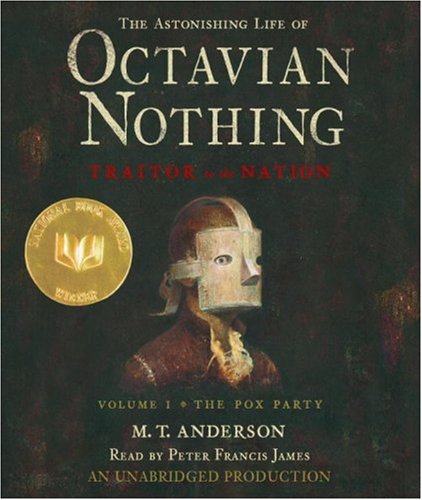 The Astonishing Life of Octavian Nothing Traitor to the Nation: Volume 1: The Pox Party

James's crisp annunciation and measured intonation is well-suited to the 18th-century language and phrasing Anderson employs in his fascinating, provocative Revolutionary War–era novel, winner of the 2006 National Book Award for Young People's Literature and also a 2007 Printz Honor Book. As young Octavian's story slowly (sometimes too slowly) unfolds, the boy learns that he is a slave and that the scientists and philosophers with whom he and his mother (an African princess who was kidnapped by slave traders) live are studying them as part of an experiment to determine whether Africans are "a separate and distinct species." The ill-advised Pox Party of the title, during which the philosophers inoculate their guests against the scourge of smallpox, marks a dramatic turning point that sends Octavian's life journey in a new direction. There's no question the premise is intriguing and the examination of issues noble. However, the meaty subject matter and Anderson's numerous stylistic devices (e.g. the use of different points of view and letters in dialect from another character) render this a challenging listen even for a sophisticated audience. Ages 14-up.