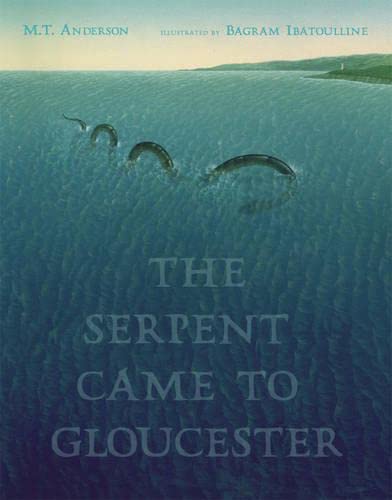 The Serpent Came to Gloucester

Anderson ( ) casts as a kind of sea chantey this reportedly true tale of a 19th-century sea serpent, spied by the people of Gloucester, Mass. "It was on a day when the sun was bright/ When the limpets were thick on the rocks," begins an unnamed boy's first-person narrative. The child spies the monster while hanging out the wash. Glass-green waves reveal a gargantuan, sinewy sea snake. "My mother drew breath and looked paler than death./ I dropped all my socks in a heap." The villagers quail, but the boy reassures them: " 'Is it back in the deep?' 'Is it eating our sheep?'/ 'I think,' I said, 'that the serpent is playing.' " The serpent, which cavorts offshore for weeks, becomes a tourist attraction. But the next summer's encore performance draws a lynch mob: "They came with their peg legs and knives/ They vowed they would drown or would stab or would stifle/ The beast, if it cost them their lives." The boy follows nervously, silently rooting for the sea serpent, and cheers the curious turn of events. Verses full of chuckles and gasps alternate with occasional stumbles (e.g., "sulked" rhymed with "caulked"). Ibatoulline's ( ) period gouaches, by contrast, sail straight and true; white spray, billowing waves, muted winter light all seem to shimmer with depth and feeling. Ages 6-10.