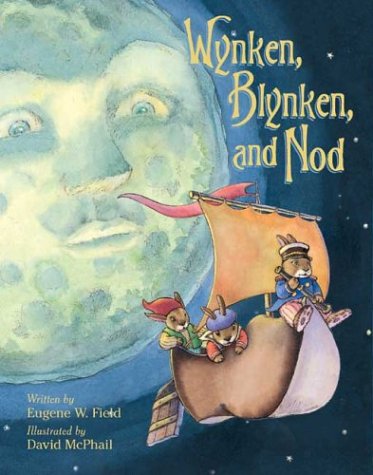 Unlike many well-known interpretations of Field's classic poem, McPhail's ( ) version of this perennial favorite emphasizes the book's original purpose as a lullaby sung by a parent to a child. Idyllic and tranquil, the pictures seem both familiar and comforting. The famous fishermen themselves look a lot like Beatrix Potter rabbits and are virtually indistinguishable from each other except for their costumes. The child to whom the "mother" (the parent here looks like a child herself) sings resembles a 1930s porcelain doll, with a pageboy haircut and glassy blue eyes. McPhail ties the story about the fisherman, the moon and the catching of herring-fish stars to the child's room by having the bunnies in the story pour out their pastel stars on top of her trundle bed, where they form a star pattern on her quilt. As the narrator explains the meaning of the characters' names, readers can see the bunny ears of the child's three stuffed animals peeking out from beneath the quilt. A final image of the wooden shoe boat floating out the window suggests that the child is about to dream the story as she sleeps. A peaceful, soothing interpretation that will appeal to those looking to re-create a world of innocence. All ages.