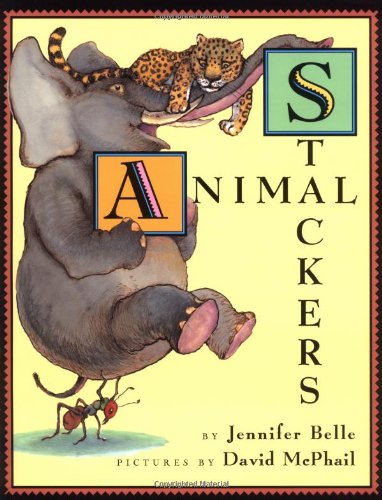 In this alphabet book, the letters in the names of animals and other critters stack up to be clever acrostics. For example, " " runs vertically from the top of the page, while the following text unfolds horizontally: " unt Alice and Mums warned me/ ot/ o make crumbs." The accompanying picture depicts an oversize ant approaching the cake crumbs spilled by a child. Familiar animals such as sheep and zebra share spreads with mythical creatures like dragons and unicorns (for X, the Chinese name for the giant panda, , appears). Old-fashioned clothing, fairytale images and timeless childhood activities such as riding a carousel and playing tic-tac-toe abound in McPhail's ( ) nostalgic watercolors, even as contemporary references and a variety of cultural settings in both pictures and poems (the Empire State Building, a Rolls Royce) give the book a modern sensibility. Belle ( , for adults) consistently captures a singular personality and a gentle humor for each entry. With " ," for instance, a child implicitly seeks permission to have the pachyderm as pet: "Extremely/ Large is an understatement/ Empties the/ Peanut butter jar./ Have to/ Ask very/ Nicely/ To keep him." McPhail makes the most of the illogical situation; he shows a child perched on an elephant's head as his aghast father reads a newspaper with the headline, "Elephant Escapes." His full-bleed spread for " ," in which the bird's head peers down inside a sandcastle, is especially inspired. This attractive volume may well prompt budding wordlovers to create a pile of their own poems. Ages 5-9.