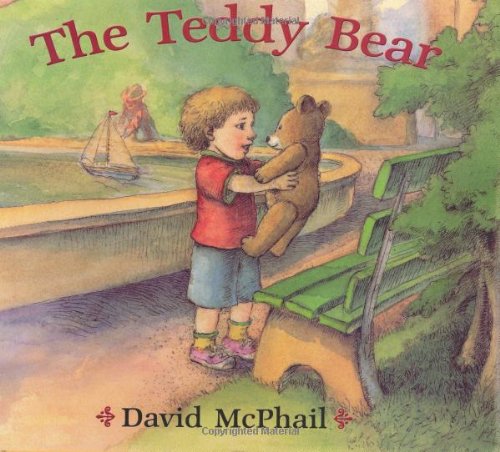 This sweet if romanticized tale of a homeless man who adopts a lost teddy bear, and the generous young owner who lets him keep it, is graced with some of McPhail's () tenderest art to date. Left behind at a diner, a small boy's beloved bear is accidentally thrown out: "He lay squashed in a dark, smelly place, and even though he had a fine fur coat he was beginning to get a chill." Rescued from the trash by a homeless man, the bear, like the boy, is lonely at first, but eventually both adjust ("The bear still felt loved"). At the park one day the bear is left briefly on a bench, where he is spotted by none other than his original owner. Delighted to be reunited with his old friend, the boy nevertheless notices the homeless man's despair and willingly gives him the bear. While the thought of any child happily relinquishing a favorite toy is a bit of a stretch, as a parable of compassion the story makes its point gently, and McPhail's glowing illustrations persuade the audience of its emotional truth. A master of wordless subtext (the man is shown sleeping under a narrow patch of sky in an open dumpster; on the facing page, the boy, surrounded by other toys, stares at the same sky from his bedroom), he invests his pen-and-watercolor illustrations with affection and warmth, and his expert use of soft shading and cross-hatching creates a welcoming world readers will want to inhabit. Ages 4-8.