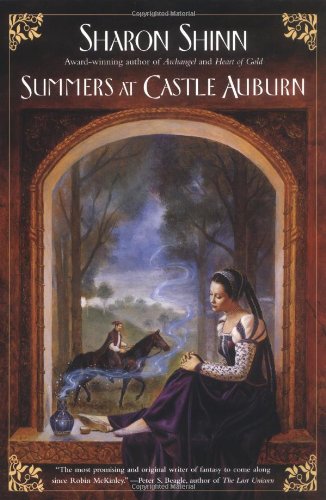 The latest enchantment from Crawford Award winner Shinn ( and the Samaria trilogy) combines romantic spice, a dash of faerie and a pinch of intrigue to create a hybrid soufflé that is delicious, if not filling. Lowborn Corie, the impressionable young heroine, spends her summers with her highborn sister, Elisandra, at Castle Auburn and the rest of the year in a village apprenticed to a "wise woman" witch/herbalist called Grandmother. Corie accompanies her Uncle Jaxon on a hunt for the Aliora, faerielike creatures who serve as unwilling slaves to the humans inhabiting this quasi-medieval world. Also along for the ride is Elisandra's future husband, Prince Bryan of Auburn, a vain 16-year-old adored by most girls (including Corie) and loathed by most men. As Corie ages, she gets over her crush on the increasingly narcissistic and self-indulgent young prince. The relationship between the sisters deepens along with the plot lines revolving around Jaxon's obsession with the Aliora and their queen, Rowena, whose flickering presence suggests other, darker story lines that Shinn might have investigated to produce a less predictable confection. The love story between the hunter and the hunted is more electrifying than the sisters' romances. What makes Bryan change is never explored fully, just as his constant bad-boy image is never explained. While the story moves quickly in Shinn's seasoned hands, her fans may be left hungry for more substantive fare.