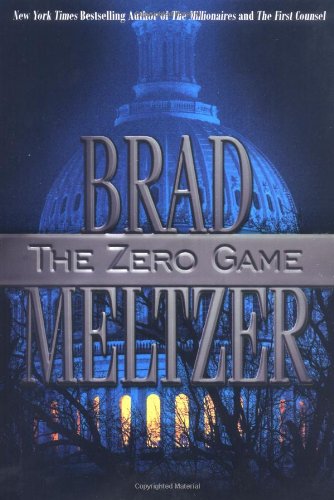 Meltzer credits 143 people in his acknowledgments, a testament to massive research involving everything from the smallest details of our government's inner workings to the scientific complexities of chaos theory and advanced neutrino research. He's far too seasoned a pro ( ; ) to ever let readers bog down in minutiae, though, using his impressive background material as rocket fuel for this rip-roaring novel of government intrigue. Best friends Matthew Mercer and Harris Sandler have worked for years as professional Capitol Hill staffers. With boredom and burnout threatening, they've joined a secret group of other like-minded workers to play the Zero Game, which uses congressional voting and government administrative procedure as the basis for placing bets. "We don't change the laws, or pass bad legislation, or stroke our evil goatees and overthrow democracy as we know it. We play at the margins; where it's safe—and where it's fun." The two decide to bet their life savings when a seemingly innocent appropriations item, the sale of an abandoned South Dakota gold mine, becomes part of the game. Because of his senior position as an appropriations committee staffer, Matthew is sure he has a lock on this one. Things go horribly wrong, and soon Harris and Viv Parker, a young Senate page, are on the run, fleeing from hired killer Martin Janos. Their flight takes them to the abandoned gold mine, where they find more mystery and near death 8,000 feet below the surface of the earth. Janos, their nemesis, is relentless, as is the action, and readers will be left breathless.