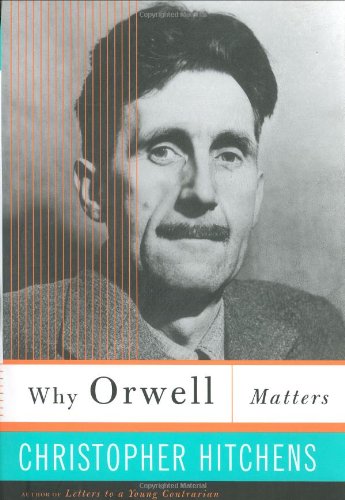 and contributor Hitchens passionately defends a great writer from attacks by both right and left, though he also refutes those fans who proclaim his sainthood. George Orwell (1903–1950), a socialist who abhorred all forms of totalitarianism, was, as Hitchens points out, prescient about the "three great subjects of the twentieth century:" imperialism, fascism, and Stalinism. In all things, Orwell's feelings were every bit as visceral as intellectual, and Hitchens devotes some of his best writing to describing Orwell's first-hand experiences with empire in Burma. It was there that he learned to hate racism, bullying and exploitation of the lower classes. "Orwell can be read," notes Hitchens, "as one of the founders of... post-colonialism." Orwell's insights about fascism and Stalinism crystallized in Spain, while he was fighting in the Civil War. Hitchens offers an excellent analysis of the writer's women, both real (his wives) and fictional, to show that the feminist critique of Orwell (that he didn't like strong, brainy women) may be unfair, though Hitchens also points out what feminists have ignored: Orwell's "revulsion for birth control and abortion." Hitchens brilliantly marshals his deep knowledge of Orwell's work. Fans of Orwell will enjoy Hitchens's learned and convincing defense, while those unfamiliar with Orwell may perhaps be induced to return to the source. (Oct.)

(Letters to a Young Contrarian The Trial of Henry Kissinger).