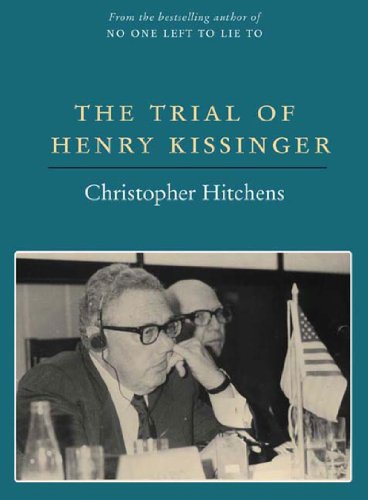 THE TRIAL OF HENRY KISSINGER

The arrest of Augusto Pinochet signaled a significant shift in enforcing international law, noticed by Henry Kissinger if not others. columnist Hitchens ( etc.), a self-described "political opponent of Henry Kissinger," writes to remedy the awareness gap, focusing on specific charges of Kissinger's responsibility for mass killings of civilians, genocide, assassinations, kidnapping, murder and conspiracy involving Indochina, East Timor, Bangladesh, Cyprus, Greece and Chile. If the book's title is direct, Hitchens's style is not. Indeed, so much attention is given to unraveling Kissinger's denials and cover stories that the underlying allegations recede into the background. Most of the material is known, but Kissinger's possible culpability has been overlooked for so long that Hitchens's stylish summation may be precisely what's required to bring resolution to a chapter in American foreign policy. Topics include what Hitchens casts as Kissinger's role in helping Nixon undermine the Paris peace talks on the eve of the 1968 election; the bombings of Cambodia and Laos, which killed roughly a million civilians; the assassination of Chilean chief of staff General Rene Schneider, whose loyalty blocked the planned coup against Allende; Kissinger's approval and support for Indonesia's invasion of East Timor and the resulting genocide; his support for the Pakistan military government's 1971 genocide in Bangladesh and for a bloody military coup in independent Bangladesh in 1975, and more. If America does not act promptly, Hitchens warns, others will, further eroding our claims to moral leadership.